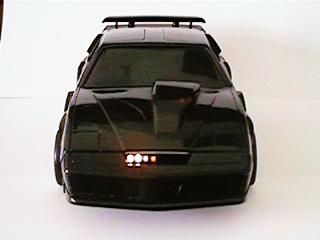 The KS5008 was designed to be a partially assembled kit for K.I.T.T or K.A.R.R. Measuring only 22mm x 30mm this tiny board should find a home in your model car. Due to advances in technology this design has shrunk to 34% of its original 34mmx56mm size. The board was supplied fully tested and programmed. As many customers require the LED's to be assembled into the nose of the car and there are various sizes of cars we have the option of fitting the LED's ot leaving them off, they are supplied in the kit what ever you choose. We have also added a slide switch to the kit to turn the light on/off.

The scanner light was designed to work from 7V DC up to 20V DC. A PP3 battery connection was supplied and also a voltage regulator all assembled. Supplied with 8 LED's either 3mm diameter Yellow/Amber or 3mm diameter Red LED's. Two patterns are programmed, the first is like the one seen on K.I.T.T, regular left to right to left loop movement with our 'SmoothSync' fading effect. The second is the light with two dots, seen on K.A.R.R. starting at each end and crossing in the middle and looping also with the 'SmoothSync' fading effect. To select the second pattern just add a wire link, its as easy as that.

Four kits were available, one supplied with Red LED's the other with Yellow/Amber LED's named KS5008R and KS5008Y, supplied with the LED's fitted or just supplied loose. The LED's were from Yoldal, both Red and Amber were 3mm, YZ-RV3N30N for the red and YZ-YU3N30N for the amber, extremely bright and reliable, that is why we used them in our products. 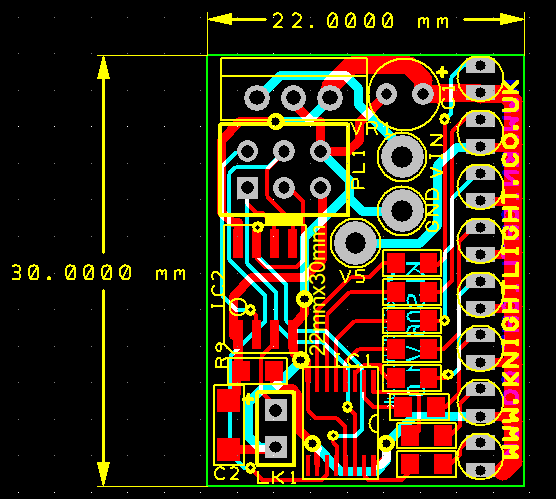 The circuit board was designed by myself. A small compact design, 8 LED's that independtly light. Control by an Atmel 'tiny' device it has 8 pins. Its outputs a serial data stream to a basic 74HC595 chip, this is a serial in parallel out device. The 595 chip gives us 8 outputs which is ideal for this design.

PCB files (Gerbers, you can get PCB's made with these)